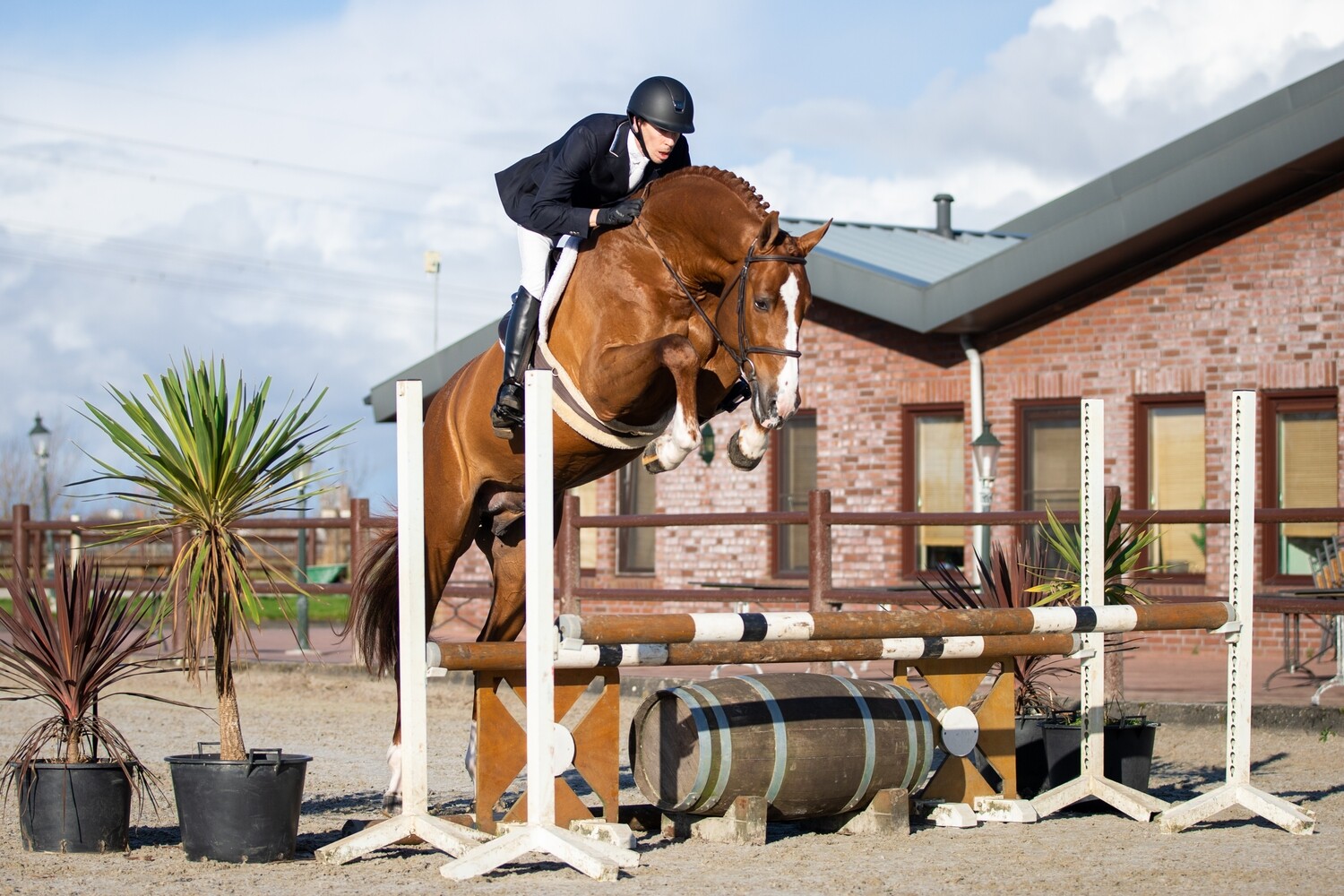 Welcome to the Party.

Exceptional 2017, 16.3 1/2hh chestnut stallion by world renowned jumping sire Kannan out of a very special Coriano/Ramiro Z/Landgraf I motherline. Kannan not only proved his worth in the Jumper ring with many successes including:

-Winner of the Belgium classic Circuit at the age of 6.

-At age 7 he was crowned the Belgium Champion.

-He made his International debut at GP winning as only an 8 year old.

-He was a regular member of the French team.

-Putting aside his own successes in the Jumper ring, he was also ranked #1 overall for jumping stallion producers in 2014 based on his offsprings top performance results such as his Olympic gold medalist winning son Nino des Buissonnets (Narcos II).

He is a true legend of the breeding world. He carries blood from all the most important jumping lines in Europe such as Voltaire, Furioso, Nimmerdor, Gotthard, Farn and Le Mexico.

On this incredibly talented young stallions mothers side stems one of the best performance producing motherlines of all times. Up to now his direct dam Miss Coriano by Coriano has produced 4 Licensed sons and 5 International ranked jumpers with her younger siblings such as this stallion up and coming.

All from one mare! She herself is not only rated a Verband premium mare and is also full sister to Internationally winning jumper Something Special. Grand dam Eroika is full sister to Diana XII(dam of the stallion Cool Water) and Rockstar(a stallion that is at the origin of such phenoms as Rockwell, Lord Carnaby and Lord Moritzburg).

Great Grand-dam Mariana is the maternal sister to Graefin(great-grand dam to the Internationally performing stallion Landprinz winner of a prestigious World Cup and many other accomplishments, as well as Somata(great grand-dam to famous Callisto and Cassiomata.

Next generation in this incredible dam line is Zorina who stems from the same line as legends Carinjo ans stallions Landprinz, Livorno, Talisman and others. Coriano himself also deserves top credit for both his successes under rider Judy Anne Melchior, including the gold medal at the Beligium Junior Championships in 2003.

His producing record and pedigree is also outstanding including offspring that were represented at the Olympic level and famous names such as Corrado I, Corofino I & II, Cabrio, Curtis, C Ceur De Lion, Cargho, Coertis, Cyrano de Bergerac and many others.

We could go on forever about this up and coming stallions pedigree and his quality. He is such an exciting stallion to be coming to North America and we look so forward to his future in both sport and as a breeding sire. Licensed AES (Anglo European Stud Book). Currently pursuing various registries for further licensing. Available for the 2021 season in North America.

Save this product for later
Display prices in: CAD
bottom of page